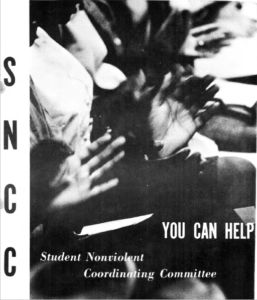 SNCC booklet sent to Northern supporters. The booklet described how to organize a “Friends of SNCC” Chapter.

In 1964, veteran fieldworkers of the Student Nonviolence Coordinating Committee (SNCC) and a cohort of northern volunteers met in Waveland, Mississippi. The 1964 Mississippi Summer Project, or what has become popularly known as the Freedom Summer, just ended and those that played a key role in organizing the summer reflected upon next steps for both the organization and the movement. In his memo, titled “What is SNCC?” James Forman sought to remind those gathered in Waveland about the roots and structure of SNCC. “The Student Nonviolent Coordinating Committee owes its very existence to the college campuses,” he explained, “and no matter how we may be organizing in communities, no matter how deep our roots may go into the people in the Black Belt, we started growing this little tree of protest in the college communities, we were supported by the Northern college communities, and in fact our name implies that we were intended primarily to be some coordinating body of students of the South.”1

SNCC and the 1964 Freedom Summer have been the subject of extensive scholarship.2 Former SNCC fieldworkers and volunteers have also been on the forefront of digitizing archival sources and making their stories and experiences accessible to a broader public.3  But the structure and function of the organization’s national network, or what Forman defined as SNCC’s “tree of protest” have received less scholarly attention. The Tree of Protest uses mapping software, digital archives, and oral history videos to reconstruct the programmatic architecture of SNCC’s Tree of Protest, including: Friends of SNCC Chapters, recruitment for the Mississippi Freedom Summer, and the post-summer activist network. The archive maps, essays, and lessons expand our understanding of the critical work and impact of SNCC on American political life in the 1960s while also contributing to ongoing conversations about democracy, citizenship, and contemporary social movements.

How to use this site

When citing maps or essays, please use the following citation format: David S. Busch, “Title of map, essay or dataset,” The Tree of Protest (2018): website address

The Tree of Protest is an ongoing project. The first iteration focused mostly on students. In the coming years we’ll be adding maps and essays on teachers, lawyers, ministers, and residents.

These are the plans for the project’s future development: